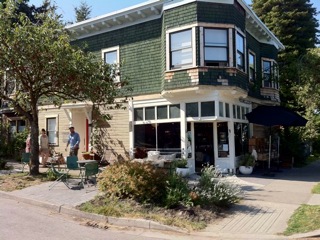 Sunday was one of those absolutely spectacular days in Vancouver that makes you completely forget about how rainy things were this past spring and our summer-less June. The sky was a deep aquamarine. The air was crisp and the temperature was a delightful 21C/72F.

I decided that this was a day to travel by local transit (half the fun is watching the people). I had read several weeks back about a small neighborhood grocery/coffee shop, Marche St. George, that was something of a favorite with locals and foodies alike. This was a “train, bus and foot” trip. I took the Expo line from downtown to the Nanaimo stop and then transferred to the #25 bus. I was heading to 28th and St. George. When I arrived at my stop 25th and King Edward, it was one of those “one pole stops” in the middle of a typical middle class, mix ethnicity neighborhood. Following instructions from my iphone GPS, I headed south on St. George toward 28th.

Arriving at my destination, I was immediately enamored with this weathered, quaint establishment that had a sort of lovingly managed slump going on. The place was hoping with young and old sitting inside and out chatting, sipping, eating. As for the “marche” in Marche St. George, there was a series of outside cubicles that held a smattering of organic seasonal fruits and vegetables. The interior seemed more coffee shop than grocery but one wall had shelving with what I suspect are some of their favorite ingredients and another wall had a stand up refrigerated unit with local and organic products. The grocery selection, while not extensive, was fresh and interesting.

I stepped up to the counter to order my drink, an iced mocha and was greeted by two very friendly staff who informed me that since they use melted chocolate for their mochas that when they applied the ice some of the chocolate would “fall out of solution” in a visually unappealing way. Being a bit of a food chemist, I concurred that yes this might happen but it was about taste not appearance. Problem solved.

Their menu is mostly sandwiches which seemed appetizing but I wasn’t hungry until I spied the zeppole in the pastry case. For the uninitiated who might think of them as “donut holes”, they are about as similar to donut holes as canned tuna is to high quality sashimi. Zeppole is an Italian treat of fried dough covered in sugar known in Italy as zeppole di San Giuseppe because it is typical prepared and served on the feast of St. Joseph. At Marche St. George these little fried gems were served in a brown paper cone and were screaming, “Eat me”. I ordered a cone.

I took my mocha and zeppole outside (it was too nice to be inside). The mocha was refreshing but the zeppole were outstanding. Pillowy and non-greasy, my three luscious sugar coated clouds of dough lasted less than minute. As I was licking the last of the sugar off my fingers, an elderly lady in black came up and said: “did you enjoy my zeppole?”. When I respond that they were just like the ones I had enjoyed in Italy, she straightened up and proclaimed “I’m Italian”. She explained to me that she made them and only on weekends. She was obviously very proud of her Zeppole and the encounter made the zeppole seem that much more of a real treat.

Marche St. George really is a delightful place and when you have time for a leisurely escape and you feel like a special Italian treat head to Marche St. George at 28th and St. George. And, use the local transit system….it makes it more a true urban adventure.