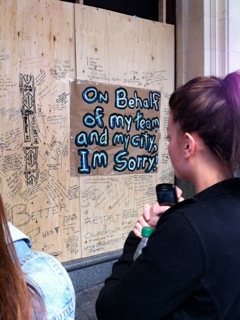 From the news reports, one might believe that Vancouver was full of Hooligans and poor sports.  It’s just not true.  Of course, it was sad to see our hockey team lose but honestly, we  lost to a better team.  It happens.  It’s a game.  We got over it. Unfortunately, a few individuals came to downtown Vancouver not to share in the “spirit of sport” but to disrupt that spirit and instead incite violence.  This morning most Vancouver-ites woke up sad and angry at what a few bad people did to our beautiful city and it’s pride.

The true spirit of Vancouver emerged early this morning with individual citizens coming downtown with their brooms to help clean up our town.  These are the people who represent Vancouver not the self centered, bad people who attempted to make us look bad.  Yes….the windows of the famous Bay Department store are boarded up but in their ugliness they’ve become a spot where Vancouver-ites can come and express their apologies and regrets for what happened last night.  It is really quite emotional to see people (many obviously immigrants to Vancouver) giving of their time and energy to help erase what the bad people did.

If there is a saving grace to the bad peoples arrogance, they stupidly thought it cool to show off for all the bystanders shooting video on their cell phones.  Let’s hope their arrogance was recorded and will be used to give them the notoriety they really deserve..in court!

Vancouver is still a beautiful city (we heal quickly) and it is full of amazing people.  We want everyone who reads this to understand that last night wasn’t really who we are.  We are the luminous city everyone expects us to be…..even when ugliness tries to invade our spirit.